What is the best camera for X?

I see that question posted a lot. Often just "What is the best camera?".

It really depends on what you are monitoring and the features you need to do that. If you are just looking for a motion alert about anything will do. Note outdoors that will likely include things waving in the breeze or reducing the sensitivity and or marking to the point you miss a lot. But if you actually want to be able to have video usable by the police or (even more usual in my case) see what caused some damage and find how it got there to do it or where some critter is hiding, you need to have the right equipment in place before it happens. And that takes some thought. Preferable leaning to the overkill side given lenses get dirty and odds are you will not think of everything that will happen that you will want footage of after it does.

Once you start looking you find WAY too many posts and even news reports where someone only discovers the video they have is basically worthless after something has happened. Then as mentioned at the start I see almost daily posts just in one Facebook group alone, much less other groups from people asking which camera or even camera / NVR bundle is best with little of no mention of what they are trying to monitor. There seems to be a common myth that there is a best best cam that is also best in every situation. Better it do a bit of planning up front for the best match to your situation and get the footage you want latter. Even then you will probably want to add or upgrade cams once you see what you get. Especially the way prices are dropping per megapixel.

Think of it like buying TV(s). If you are cool with watching TV on a phone then the stream quality does not matter much. If instead you are coming from a 25 inch analog TV to a 40 inch 720p looks awesome but a get you see 1080p you will never go back. Though 4K is probably overkill till you are ready for a larger screen as well. But for TVs HDR (kind of analogous to color low light sensitivity in cams) is probably more significant to most than 4K. Though to get HDR you generally need to buy a higher end 4K TV.

If you are looking for some examples of what actual footage from several models of cameras look like check out my playlist of security camera examples.

Use the above to figure out the minimum specs you need to get usable video.

This why I currently have online are a mixture of brands and models. See my compare sheet.

To find the best camera(s) you need first by gathering the answers to most of the above then ask that question again and or do a bit of research.

Again plan on wanting more once you know what you have been missing you can easily want to cover every inch. I started with a tower cam on a rotor so I could see what the dogs were barking at without having to go to the right window or maybe even outside to see. Even with all my cams I  still have spots I want to add cams. 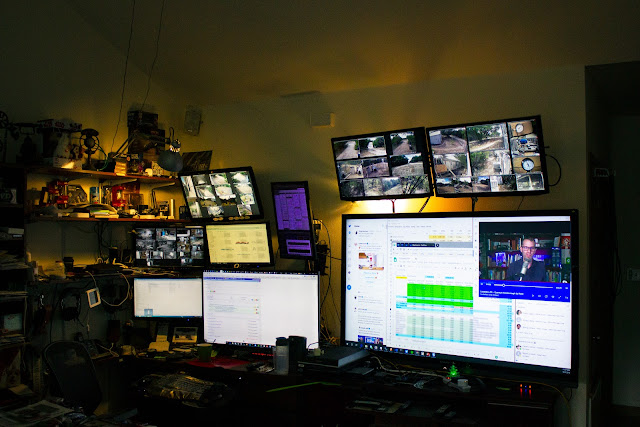 This whole blog is me documenting what I learned from what I've tried, what worked and what didn't despite of or confirming other's claims. And hoping to spare others some of the pain.

Adding this which should be pinned to the top of every security cams group.

FIRST figure out the specs you need for each camera location THEN start looking at models. You might be OK with Wyze cams or need $10K worth of gear to do what you want. The important part of that is what YOU want. I currently have 61 cams online and I'm still adding and doing upgrades but that is me. I'm covering multiple buildings plus acreage and I have critter issues. Some are OK just seeing something is moving on their phone.

The basics for usable footage (not just motion detection):