I look like a bad cable might have killed the Amcrest IP8M-2496 I had pointed at the north yard. I was thinking I might want to swap it with a Reolink 511 anyway as I had a couple spares. With all the posts suggesting 4K (8MP) cams I thought this would be another good compare of 5MP autofocus vs 8MP. Or how rez does not make up for proper focus. Since the Amcrest died the shots are not exact compares but are from the same time on two consecutive night so damn close. Ignore the on screen times. The Reolink seems to be on PST. Bost cams were tweaked a bit to get the best looking video though not that far off default values.

The replacement is the Reolink PoE Camera 5MP Super HD 4X Optical Zoom Outdoor Indoor Video Surveillance Work with Google Assistant, IP Security IR Night Vision Motion Detection with Phone App RLC-511 which claims a 90 degree horizontal view angle but give no low light info other the 0 Lux with IR on. And as I'm writing this is going for $71 on Amazon.

First at high noon. You can see the view is a bit wider in the Amcrest though not as clear. Especially in the shadows. Note the white dog in the Amcrest shot is not easier to see than the black dog in the Reolink shot.
Zoomed in to roughly the same section of dirt.

How about an early morning shot just as the cam flips to color mode? In this one it is a tougher call but the Amcrest might be a bit better.


On IR the Amcrest is better close in but the Reolink kills it in the darker areas. Note there is an IR flood on the side of the house near the dog.

As a compare and to kind of take the cams IRs out of the equation here is a shot from the Reolink with the cams IR LEDs off. I wish I'd saved a similar shot from the Amcrest when I installed the IR flood. 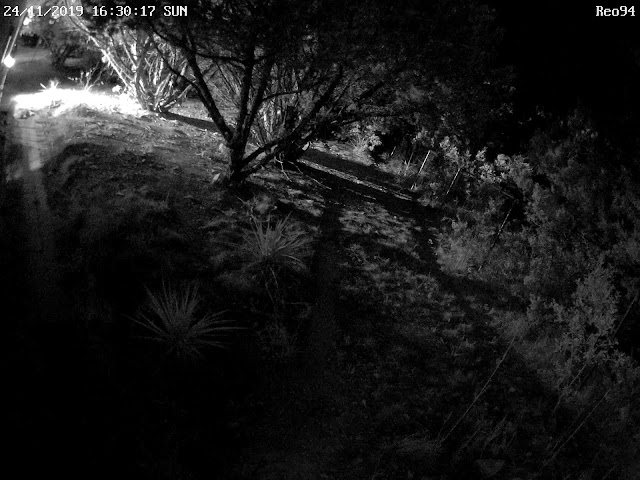