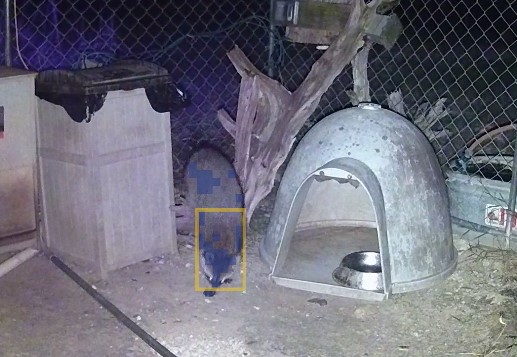 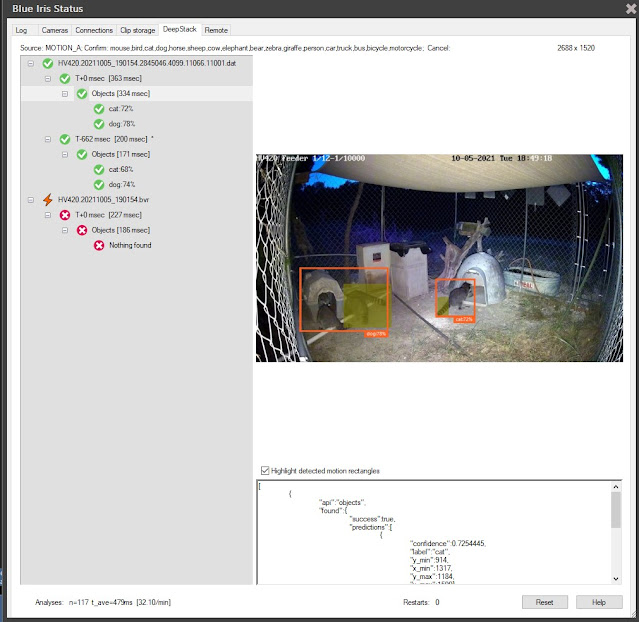 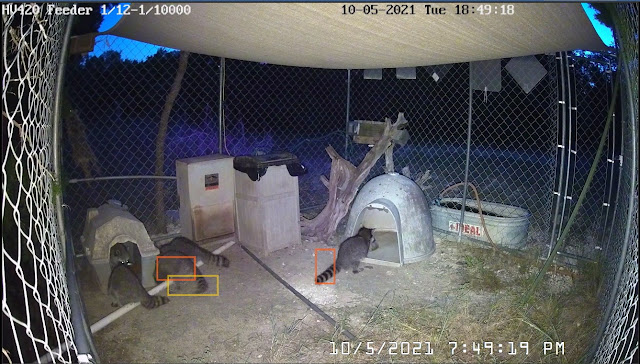 You will note there are 6 raccoons in this shot. The lone one is mainly IDed from its tail. Two motion blocks are on a second raccoon by BI's motion detection and the reset are unseen. DeepStack seems to connect the lone raccoon to its tail to ID it as a cat but takes the 4 in a group, along with the dog house as one objects and IDs it as a dog. Note too the confidence was higher in the second clip but the results returned were from the first clip. I could see how this might been interpreted as a bug though whether to return the min, max, average, confirmed, first or last could be a matter of taste or best fit for a given target. This also might give some insight into tweaks in motion detection settings that might help you get better notifications.
Posted by Avatar42 at 11:10 AM No comments:

Simple copy paste reply for "what cam / system should I get?" posts.

People seem to not read the links so I've made this reply to copy paste in.

The probs with asking for info like this are that setups can be VERY subjective as to what is good enough and you mostly get I like or hate X for replies even if you have specs for what you need.

First thing you need to think about is what is it you expect to see. For cameras there are DORI (Detection, Observation, Recognition, Identification) numbers that tell you at how many feet you can expect what level of detail you can see. So pick a level, Detection, Observation, Recognition or Identification that you can live with first or you are just wasting your time and money. If you really have no idea then stop here and get something cheap like a Blink Mini to get a feel for what you can and can not see.

Before looking at brands sort the number cams and specs each needs to be to see that level of detail at the distance each camera is expected to monitor. Here are instructions for a free online tool that lets you virtually add cams to your site and play with specs to see coverage and expected results. https://securitycam101.rmrr42.com/2020/05/getting-cam-specs-easy-way.html
Then you can make a plan for what you will need and not end up tossing stuff for upgrades.Remember you do not need to do it all cameras, lights and sensors at once so this can also help prioritize the order to add things.
⁠
Avoid WiFi wherever you can. Since you need to get power out there anyway you should look at Ethernet Over Power adapters where running Ethernet cable is not practical.
⁠
That said the $100-200 per cam range seems to be the sweet spot for bang for the buck. Though as I've said some will be fine with cheaper and others will not consider any cam under $1K. So sorting what works for you is key. My "go tos" if you have a bit of light and your target is under 50 feet max are ColorVus. For further I like Dahua varifocals (zooms). But I have a dozen brands, much less models in use.
⁠
As far as a NVR you will want to make a list of features you want and then see which of the ones that has those looks easiest for you to work with. Personally I like Blue Iris. Mainly because it is so easy to interface with things like home automation and AI systems. Plus relatively simple to upgrade a PC to well beyond the limits of a standalone NVRs. But for example if you wanted camera and radar linkage you might be better off with a Dahua setup. Of course we are talking serious money there. Either way leave room to grow as odds are you will want to add to your system.
⁠
Even if you have the bandwidth for recording to the cloud I would only plan on it as a backup. The ultimate setup would be recording 24/7 to a SD card in the cam and a local NVR then backing up alerts to the cloud. As a rule being able to record 24/7 means no battery powered cams.
Lastly think about supplemental lighting like accent lighting and or IR floods as in camera lights tend to draw bugs and spiders. You will want to place these extra lights off axis from the cam to avoid glare issues too.
Posted by Avatar42 at 11:02 AM No comments: