First note, oddly they seem to use diff and conflicting plugins so you can only view the stream from one or the other in IE at the same time.

Second I had a 256 GB SD card from my old LG V30 phone that I had previously used in the SereneLife IPCAMOD47 failure which I tried to use in the IPC-HFW2831T-ZAS-S2  after formatting it but it appeared as 2 drives and failed to format. I did not have a second to 256 GB to try so it might have chosen that time to go bad. Sticking the 256 GB SD back in a Windows 10 PC it says only 47 MB like the second drive listed in the camera now. Sticking a 128 GB into it seems to work OK. I was able to recover the 256 GB SD with SD formatter.

These videos the Dahuas start off on max zoom. You can see me stepping off and dropping eye charts at about 50, 100 feet and at the gate about 188 feet from the camera array.  There is an old license plate on the cart I'm pulling for reference too. At about 1:24 PM I start back from the gate. About 1:40 PM both Dahua cameras are zoomed to max view angle to compare with the Amcrest.

The 6MP looks slightly better to me. Start with just IR lights on (note mainly from IR flood). Shortly after the start the white driveway lights come on the go off just before the end of the video. The driveway lights have almost no affect on the video detail. Passing cars give indications of motion blur affects from the slow shutter speed.

The 8MP does way better here. Both cams are set to manual 1/12 exposure, color mode and 0-100 gain range. Otherwise all default settings. Start with just IR lights on, mainly from IR flood, but they seem to have no real affect unlike the HikVision ColorVus that tend to get a purple tint when IR floods are on. About 9:38 PM the white driveway lights come on making a dramatic change in both videos.

For instance the old school house across the street lit by its own security light is about all you can make out on the 6MP though if you look real close can see where the sky is slightly lighter the trees and shadow on the ground. After the driveway lights come on the detail is better but 50 foot detail is still not as good as in IR night vision. Though past 50 feet it was better in color mode.

By contrast the 8MP actually appears to be in color though again the details are few. You can kind of make out the eye chart silhouette and moon shadows. After the driveway lights come on the detail is almost that of day time.

Passing cars give indications of motion blur affects from the slow shutter speed. Shortly before the end of the video the driveway lights go back off again showing how quickly the cameras adapt. 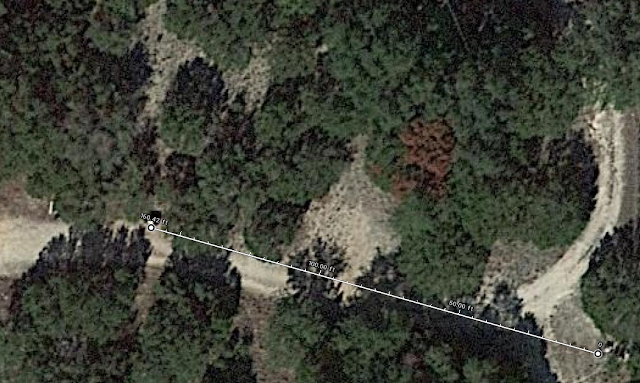 You can watch the videos to see how fast the zooms and focusing work but are some quick snaps to see how the cams compare in max zoom. The calculated DORI numbers are

Click on an image to see close to full screen and rapidly switch between.

Just to drive home the diff distance makes, here are views from the cameras mounted about 20 feet from the UPS box.

I used the 6MP Dahua and will use the new 8MP cam in max zoom but while I have them all together I though I'd get some wide angle view compares as well. Not e how much the auto focus improves the detail. The 50 foot chart is clearer even to the 6MP camera than the fixed Amcrest 4K. The Dahua 4K is even better. Granted it is also almost twice the cost of the Amcrest.

Note description says 36mm lens but I think they mean 3.6 mm lens and it is fixed, not zoom (see below).

Manual and specs can be found here

When I went back looking for an alternate to this I'm wondering if I meant to order this 5 MP cam given it looks exactly the same though has totally diff specs and only $20 more. Already boxed this one up to go back. Below is why.

Stuff that would be pros but did not get to try