What size PC do I need for Blue Iris?

I would always suggest you get the fastest CPU and GPU you can afford with enough hard disk space to save about a week's worth of 24/7 video (you should always record 24/7). To figure the HD space is not that hard. Just use this tool. It will also tell you how much bandwidth you would need to get to the NVR or cloud storage.

You should also look at Optimizing Blue Iris's CPU Usage to get the most out of the hardware you have.

But if you are trying to sort the minimum CPU and GPU you can get away with or trying to justify the cost of an upgrade I should note it is almost impossible to get a definitive improvement number of X setup over Y unless you have both running side my side looking at the same cams. Things like the amount of motion the cams are seeing, overlays and other features in use factor in too. However this page Blue Iris Performance Statistics has a sortable and filterable table of config and load data collected from around 1400 user servers.
On IP cam talk there is Choosing Hardware for Blue Iris though it recommends 6th gen and older though I'd say 8th gen is probably the best bang for the buck since it has 12 threads instead of 8 and the cost diff is often  less than $100. Plus you are talking a lot newer hardware so it will probably be working longer. See update below about a 10th gen I found on Prime day for an 8th gen price.
But that still just gets you in the ballpark.

For instance I have this i7-4790 I bought used almost 5 years ago now with 10 outdoor cams  that was running 50-60% CPU when I looked at it the other day when it was relatively calm. Today it looks like this, maxing out about 72%

I built a i7-8700 with those same 10 cams to replace the 4790 PC. Even after adding another 6MP cam it was running 20-30% CPU during the same period as the above. Today it is maxing about 21%
While both have the same configs for the cams in common but even without the extra cam that is not definitive for the CPU because the newer machine also has a better GPU (730 vs 1050), twice the RAM and is running BI5 instead of 4. Though the newer system actually appears to be using the GPU where the older one does not.  (The 730 does not appear to be supported for much.) Below are my other 3 servers to give an idea how motion, CPU and GPU factor in. All use an SSD for the Blue Iris DB and close to the same HDs for recording so the storage should not be much of a factor between setups. Note you can look at the motion column in the cam listings to get an idea of the amount of motion each cam relative to others on that server is seeing though the numbers are not relative between servers / consoles since the counts all start at server reboot. Also in almost all cases other than cam 93 the ones showing NoSignal counts are WiFi cams.

This one is close to max with 9 outdoor and 3 indoor cams on it.
This one pretty maxed at 15 outdoor cams on it. Note I noticed the next day, after rebooting for updates, it was using the GPU pretty heavy. Similar CPU load though.

And just to show the diff motion can make, this one with 23 active and 1 offline indoor cams that could handle a few more. 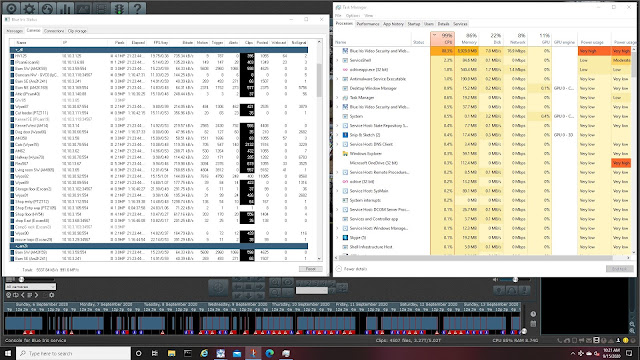 Update 7/5/2021:
Wow you wonder how much diff an upgrade can make. I got a PC with a 10th Gen Intel Core i7-10700 8-Core Processor running at 2.8Ghz with just the onboard Intel 630 graphics to start with on Prime Day. Cost less than the last 8th gen i7 I bought with half the RAM. Installed latest BI 5.
It is replacing 6th gen i7 4-Core at 3.4Ghz with a Geforce 730 running BI 4 (Iris 4 above) with a bit more optimization and less cams from previous tests.
CPU Benchmark compare
Same RAM and SSD C drive with spinning for storage.
I imported settings from the old to the new so they are identical and running side by side processing exactly the same streams from 22 active indoor cams.
Old system 13 to 34% CPU for Blue Iris
New system 3 to 4%!
Note the % reported by BI is lower than Task Manager by around 3% on both.
I should be able to pull the other indoor cams back onto this server and even run DeepStack on it without maxing it out.
Here is shot with all the indoor cams back on the server. Though the Wyze cams are getting almost impossible to keep online these days. I'm going to have to replace them all.
Almost 1100 MP/s and peaking at around 14% load. Note I could be running DeepStack on here as well but I went with onw DeepStack on my main Linux server for all 5 BI servers to only have one to easily monitor.
Posted by Avatar42 at 12:52 PM