I hear people say this a lot but when you try and ping them down they never seem to be able to tell you which model is which. There are post like this one where people claim they have up Dahua firmware on some models of Amcrest cameras which they think implies Dahua made them but they do not know which model. Usually I just don't have the time to look into it with so little to go in. This one claims to have upgraded an Amcrest model I have, the Amcrest IP8M-2496EB, so I thought I'd take a it to see if I could actually find a Dahua model of that cam and if the Amcrest was any cheap or if there was any other reason to buy the Amcrest of just getting the Dahua (if there was on). The firmware mentioned, DH_IPC-HX5X3X-Rhea_MultiLang_NP_Stream3_V2.800.0000014.0.R.191203.zip, is used by a few models.

The Dahua wiki shows 3 8MP bullet models including the IPC-HFW2831T which is one of my current favs. Nothing that looks close to the Amcrest. But I'm not finding my Dahua 6MP model there either so not definitive. 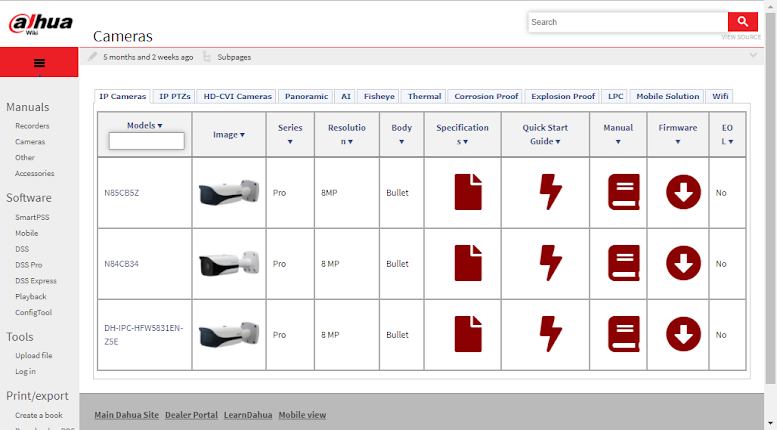 A look at the Dahua product selector seems a bit more promising as it has my 4631 listed but still nothing that looks like the Amcrest. However the IPC-HFW4831E-SE is close and the specs match. The actual case is just a bit different.

If you want to compare the camera software features between the 2 8MP cameras you can get the Dahua manual here and the Amcrest IP8M-2496EB manual here.

So lets try another. The Amcrest IP4M-1026  which has similar low light performance to the Dahua 6MP IPC-HDW4631C-A Note you get 20% more rez plus audio for just $10 more than the Amcrest. The Amcrest it pretty distinctive with its angled shade and case. None of the Dahuas look anything like it. Same goes for the "eyeball" version IP4M-1055E. The closest Dahua match appears to be the IPC-HDW2439T-AS-LED-S2 which appears to be cheaper than the Amcrest.

So we are 1 for 3 which means some of them my indeed be made by the same people that make some of the Dahua cams. If Dahua makes all of its models is still a bit unclear. The Chinese supply chain seems to cross a lot.  But I don't think it matters all that much. Once you sort the specs you want for a cam you can see what models of what brands match up and then see if any one has loaded a more feature rich firmware on it or even give it a try yourself. It seems that in many cases the loader with not load something that will brick the cam though in some cases you might lose a feature you liked and not be able to go back.

You might also want to look at this Wikipedia entry which outlines known Dahua security issues.